Robert Mustard began his Yoshinkan Aikido training under Takeshi Kimeda Sensei (9th Dan) over 35 years ago. After achieving the level of sandan (3rd degree black belt), he left Toronto to continue his study at the Yoshinkan Aikido Honbu Dojo (headquarters) in Tokyo.

In 1987, Mustard completed the intense 9-month “Senshusei” training course which is mandatory training for the Tokyo Riot Police and Honbu Dojo instructors. As a direct result of his determination and focus in this gruelling training, he was among the first foreigners ever to receive the award for best performance at the annual All-Japan Yoshinkan Demonstration.

For close to 10 years Mustard sensei trained as a student of Soke Gozo Shioda, founder of Yoshinkan Aikido, Takafumi Takeno Sensei, 9th Dan; and Tsutomu Chida Sensei, 8th Dan. In 1991 Mustard Sensei was appointed Itaku Shidoin by Shioda Kancho and remained the Chief Foreign Instructor at the Yoshinkan Honbu Dojo until he moved back to Canada in 1995.

Mustard sensei attained the rank of hachidan (8th degree black belt) in September 2015, and was awarded the title of Shihan, ‘Teacher of Teachers’, in August 2011. Today Mustard sensei is recognized worldwide as being among the very best Yoshinkan Aikido practitioners and instructors. 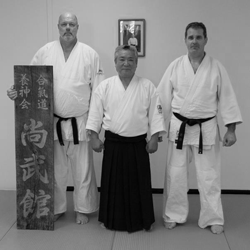 In 2013, as part of the 10th anniversary celebration of the opening of Aikido Yoshinkai Burnaby, Kimeda sensei gave Mustard sensei’s dojo the name ‘Shobukai’. To consolidate the support in the UK for those following the model of Yoshinkan Aikido set out by Mustard sensei, the Aikido Shobukai UK association formed in the summer of 2014.

Aikido Shobukai UK is insured and run in accordance with the governance set out by the British Aikido Association.